Austin Chumlee Russell, the American reality TV star and pawn shop employee has a net worth of $5 million. He also receives a salary of $25,000 for every episode of Pawn Stars that is broadcasted which is accumulated in his overall net worth. Read below to find out more about the famous Chumlee.

Austin Russell was born on September 8, 1982. He was nicknamed “Chumlee” after his father compared him to the walrus that appeared in the cartoon “Tennessee Tuxedo”. 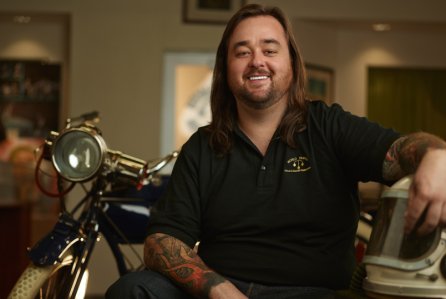 Chumlee is friends with Corey Harrison since childhood. Corey is the son of Rick Harrison and grandson of Richard Harrison who owned the Gold and Silver Pawn Shop, situated just a few minutes from the Las Vegas strip.

Chumlee started working as an employee at the Gold and Silver Pawn Shop when he was just 21 years old. He worked there for five years after which the History Channel started a reality show about the shop called “Pawn Stars” in 2009.

The Pawn Stars is one of the oldest running television series and is very popular for showing the going-ons at the 24 hour Pawn Shop. Since it debuted in 2009, the show has aired more than 446 episodes across 12 seasons.

Although he is portrayed as the dim one in the show, he proved his haggling skills by getting a local Maserati Shop for selling him a car worth $100,000 for only $85,000.

Chumlee is very fond of video games and spends his free time (and money) buying old games. He has also started his own business of selling customized T-shirts and novelty items.

Chumlee enjoys collecting shoes and has more than 200 pairs. He owns several luxury vehicles including the Maserati, Rolls Royce Phantom, Cadillac, and a 1964 Impala SS.

He is currently dating Tanya Hyjazi who is the chief of a casino situated in Las Vegas.

You May Also Like: Jensen Ackles Net Worth and Joe Giudice Net Worth