Former NBA player, Jamal Mashburn has a net worth of 45 million dollars. 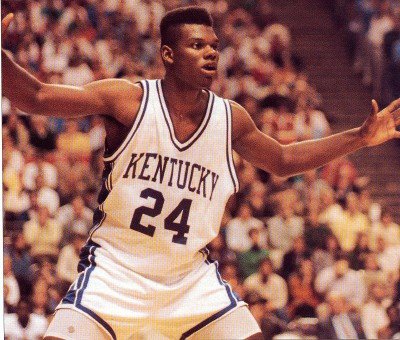 Born in New York in 1972, Jamal started playing basketball in college for University of Kentucky. He joined NBA as a small forward. In his 20 years at NBA, he played for Dallas Mavericks, Miami Heat, Charlotte Hornets, and New Orleans Hornets. His salary from the teams helped build up his net worth. In his 12 seasons in the league, he scored abundantly and had a career scoring average of 19.1 points per game. As a player, he won various awards, including SEC Player of the Year at the University of Kentucky in 1993 and NBA All-Star while playing for New Orleans Hornets in 2003.
In spite of retiring from basketball, it was Jamal’s business ventures that kept his wealth growing. He has shares in various restaurants, including 3 Dunkin’ Donuts franchises, 37 Papa John’s franchises, and 34 Outback Steakhouse franchises. Due to his interest in automobile business, he owns Kentucky’s Toyota on Nicholasville and Lexus Store of Lexington. He also has some holdings in real estate and some shares in Ol Memorial Stable, the company that owns Buffalo Man.

After retiring from basketball due to his knee energy, Jamal was offered a job of a basketball analyst for ESPN, which he accepted and stayed at this job for four years, from 2006 to 2010. Working on TV also helped in increasing his wealth.

Jamal’s wife, Michelle Mashburn is an entrepreneur and a certified personal trainer. She helps her husband in running their various businesses. They have a daughter named Taylor.

Jamal Mashburn earned his $45 Million net worth through his career as a basketball player, his businesses, and his work at the TV as an analyst.

You May Also Like: Nate Diaz, Brett Favre, Ray Lewis