The American Television personality and stand-up comedian is a rich man with a net worth of $100 million. His name features in 20 richest American comedians due to his massive net worth. “You might be a redneck” jokes are his best contribution to the industry and he is widely known for it. Along with Ron White, Larry the Cable Guy and Bill Engvall, Jeff Foxworthy is a part of the famous comedy troupe “Blue Collar Comedy Tour”. 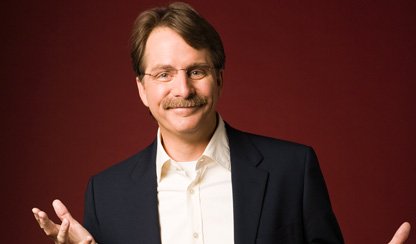 Jeff Foxworthy didn’t climb the ladder of success straight away. He dropped out of Georgia Tech University and worked as a maintenance guy in the IBM’s mainframe computers department for five years. His friends and colleagues discovered his hidden potential and motivated him to start his career as a comedian. He quit his current job and started by participated in Punchline comedy club’s contest “Great Southeastern Laugh-off”. This is where he got his recognition from, and by the mid-1990s, he started appearing in TV shows.

His first show was “The Jeff Foxworthy Show” on sitcom channel. As mentioned earlier, Foxworthy appeared with his fellows Bill Engvall and Larry the Cable Guy in the Blue Collar specials’ episodes. Since 2005, he is hosting the show “Are you smarter than a 5th Grader?” which has been a successful show and has earned him loads of dollars. He has released six albums of his comedy recordings and is currently the best-selling record comedy person of all time.

Jeff is a strong believer of the teachings of Bibles and tries to adopt it’s teachings in the everyday life. According to him, complying the teachings of the Bible is way more important than attending the proceedings of the church. He is a married man with 2 adorable daughters with his wife Pamela Gregg. The couple met in Atlanta and is married since 1985.

Jeff Foxworthy has a net worth of $100 million.