Robert Kardashian Jr., better known as Rob Kardashian, has a net worth of 6 million dollars.

Kardashian was born on March 17, 1987, to Robert Kardashian and Kris. His father was an attorney. He has three older sisters, Kim, Kourtney, and Khloé. His parents divorced in 1991 and in the same year his mother married Olympic decathlete Bruce Jenner (now Caitlyn Jenner). Kris have two daughters with Bruce, Kendall and Kylie. They are Rob’s half-sisters. 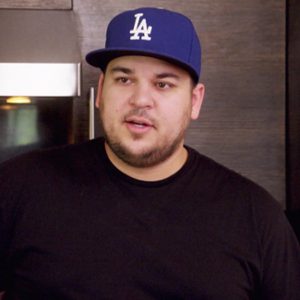 Rob Kardashian is best known for featuring on the television reality show Keeping Up with the Kardashians. The show centres upon the Kardashian-Jenner family. It premiered in 2007 and has become a huge success since then. The show is currently in its twelfth season. Rob has also appeared on the spin-offs of the show, including Kourtney & Kim Take Miami and Khloé & Lamar.

Kardashian was a contestant on the 13th season of Dancing with the Stars in 2011. He was paired with Cheryl Burke. He did better than his sister Kim (who was eliminated in the second week of the show’s 7th season) and advanced to the finals. He and Cheryl lost to J.R. Martinez and Karina Smirnoff.

Kardashian has started several business ventures and worked with brands such as, PerfectSkin, Rival Spot, and the BG5. He was one of the final judges of Miss USA 2011. In 2012, he appeared on Fox’s dating game show The Choice. In the same year, he launched his sock line, Arthur George. He was diagnosed with diabetes in 2015.

In 2007, Kardashian dated actress Adrienne Bailon. Since January 2016, he has been dating model and entrepreneur Blac Chyna. They announced their engagement on April 5, 2016, on Instagram. They are expecting their first child. Kardashian got his own reality show titled Rob & Chyna in June, 2016. The show follows Rob Kardashian and Blac Chyna’s relationship. It premiered on September 11, 2016. Kardashian serves as an executive producer on the show.

Rob Kardashian has acquired his $6 million net worth from his career as a television personality and through his business ventures.